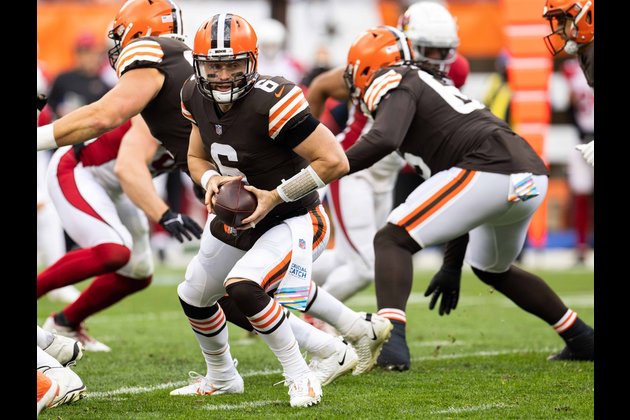 Baker Mayfield and Nick Chubb are trending toward returning to action on Sunday as the Cleveland Browns host the Pittsburgh Steelers in an AFC North clash.

The meeting between the Browns (4-3) and Steelers (3-3) is their first since Cleveland recorded a 48-37 victory in Pittsburgh in an AFC wild-card game on Jan. 10.

Mayfield, who threw three touchdowns in that game, sat out the Browns' 17-14 victory over the Denver Broncos last Thursday with a left-shoulder injury.

Chubb, who had 145 scrimmage yards in that playoff encounter, has missed two games due to a calf injury.

"I'm completely confident in (playing on Sunday)," said Mayfield, who took first-team reps on Wednesday. "If you go out there (and) you're scared, you're timid, that's how you really get hurt seriously, so I can't do that.

"So like I said, trying to get the strength back and be able to go as close to 100 percent as possible, and if that's not the case, then we trust the guys we have out there. You guys saw that. We came out with a win with kind of a manufactured team, and Case (Keenum, backup QB) did a great job."

Chubb, a two-time Pro Bowl selection, would like to follow Mayfield's path back to the starting lineup.

"I hope so," Chubb told Cleveland.com before practice Wednesday. "We'll see how this week goes, see how practice goes and make a decision later on."

D'Ernest Johnson erupted for 146 yards with a touchdown in his first career start on Thursday. He was voted the FedEx NFL Ground Player of the Week for his performance.

Veteran right tackle Jack Conklin told reporters he intends to return from a two-game absence due to a knee injury.

Jarvis Landry sat out Wednesday's practice with an ailing knee, although Browns coach Kevin Stefanski said it's not an aggravation of the sprained MCL that caused the wideout to miss four straight games this season.

Sunday's game also will feature two of the NFL's best in terms of chasing down the quarterback. Cleveland's Myles Garrett leads the league with 9.5 sacks, 2.5 more than Pittsburgh's T.J. Watt.

The Steelers answered a sluggish start to the season by winning their last two games before heading into the bye week. The Pittsburgh players appeared to show a bit of pep in their step in the eyes of onlookers at Wednesday's practice, and wide receiver Chase Claypool had a hunch as to why.

"It might be because of the bye week that we have more energy and more fun, or it's because we're playing the Browns," Claypool said. "Either way, we're having more fun out there."

Roethlisberger threw for 501 yards and four touchdowns in the playoff meeting with Cleveland; however, he also threw four interceptions.

This season, rookie Najee Harris controls the backfield with a team-leading 388 yards. His 34 receptions are tied with Diontae Johnson for the club lead.