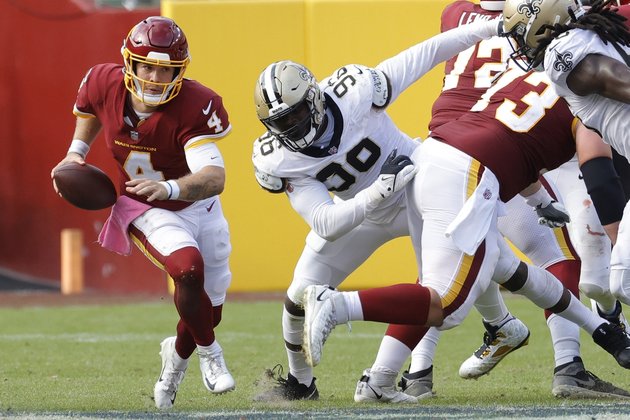 The Denver Broncos went into their matchup against Cleveland knowing getting a win was crucial. Some even considered it a must-win game for them.

If that was the case a week ago then the stakes for Sunday are even higher. The Broncos (3-4) have cratered since winning their first three games andnow have a chance to right the ship, even for one game, when they host the Washington Football Team on Sunday.

Washington (2-5) is coming off a 24-10 loss at Green Bay in a game it did not punt but still managed just one touchdown. The Football Team is also mired in a slump, having lost three straight and four of its past five, but the play of quarterback Taylor Heinicke has been encouraging.

Heinicke stepped in when Ryan Fitzpatrick suffered a partially dislocated hip in the season opener and has shown flashes of what he displayed in a playoff loss to Tampa Bay last January. The Football Team is going to stick with him for now despite his inconsistent play.

"Some of his inexperience is showing," Washington head coach Ron Rivera said. "But I think obviously he has the skill set that you're looking for, he does have the ability to lead, but he's still young in terms of actual opportunities and experiences as a quarterback in the league so far."

Heinicke has thrown for 1,658 yards, 10 touchdowns and seven interceptions in six-plus games. He has carried more of the offensive load because the Football Team has not run the ball as effectively as last season. Primary running back Antonio Gibson is averaging just 58.3 yards rushing per game.

Still, if last week is any indication, then Denver will struggle to stop anyone carrying the ball. The Broncos allowed Cleveland's third-string running back, D'Ernest Johnson, to rush for 146 yards and a score in the Browns' 17-14 win.

Most of those came with linebacker Von Miller out after he suffered an ankle injury. His status for Sunday was unknown mid-week but he said after the Oct. 21 loss that he was determined to play against Washington. He did not practice Tuesday or Wednesday.

Denver did bolster its defense with a pair of trades over the past week. The Broncos acquired two linebackers -- Stephen Weatherly from Minnesota on Saturday and Kenny Young from the Los Angeles Rams on Monday.

Both could see some significant time in Sunday's game.

Young was a little surprised he was traded a day after getting a sack in the Rams' win over Detroit.

"You never know what to expect," he said. "It's the business of football. My obligation is to do my job. I will just keep it at that. At that time, we were on a run, and it was confusing to me for a second."

Denver's stalled offense will get a boost with the return of speedy receiver Jerry Jeudy, who hasn't played since the opener when he suffered a high ankle sprain. The Broncos will be without center Mike Purcell (thumb), but tight end Albert Okwuegbunam returns from injured reserve after missing three games with a hamstring injury.