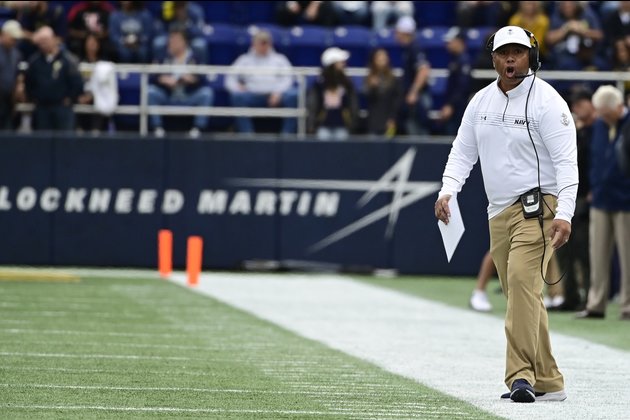 After a third straight loss, Navy coach Ken Niumatalolo this week described mixed emotions in his team's locker room Monday following yet another missed opportunity against an imposing foe.

The Midshipmen will be eager to use those emptions to turn their season around when they travel to Oklahomato face Tulsa on Friday night.

Navy (1-6, 1-4 American Athletic Conference) led No. 2 Cincinnati for much of the first half last Saturday before the Bearcats pulled ahead 27-13 midway through the fourth quarter. Navy strung together a long touchdown drive and recovered an onside kick in the final minute before Tai Lavatai threw an interception with 25 seconds to play.

Navy previously challenged another unbeaten conference foe, current No. 19 SMU, before losing by seven on Oct. 9. Niumatalolo insisted a 28-20 loss on Sept. 25 to Houston, which is now 6-1, belongs in the category of missed opportunities, as well.

"We just had our team meeting. Guys are disappointed but also encouraged," Niumatalolo said. "Basically three top 25 teams have been one-score losses. But you still lose the game, you know what I mean?"

The 15th-year head coach is using the losses as learning moments for his players to rectify mistakes and botched plays that have contributed to Navy's dismal record. The Midshipmen must win out to become bowl-eligible and avoid their third losing season since 2018.

Tulsa (3-4, 2-1) is coming off its bye week after winning two straight, most recently a 32-31 squeaker over South Florida on Oct. 16. Senior running back Shamari Brooks ran in the winning touchdown for the Golden Hurricane in the final minute.

Tulsa is 3-1 in its last four games, with Brooks notching at least 22 carries, 126 yards and a touchdown in each win. Those efforts quickly turned the Tulsa native into the AAC's fourth-leading rusher on the year (561 yards).

"I do think our running game has really picked up pace in the last several weeks," coach Philip Montgomery said. "I think there's more continuity right now. Offensive line-wise, we've got to try to stay healthy there. ... Shamari has carried a lot of the load."