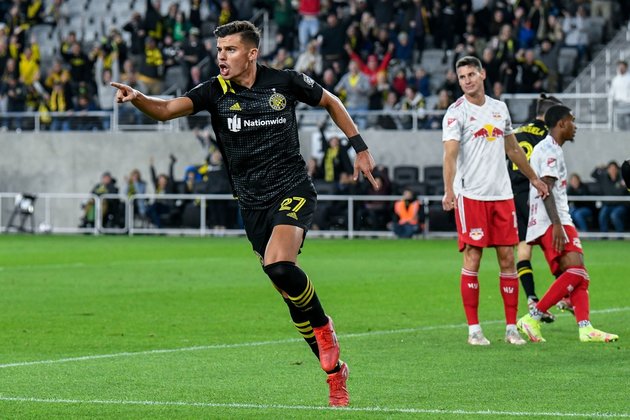 The Columbus Crew try to keep their faint postseason hopes alive when they host Orlando City on Wednesday.

Columbus (10-13-8, 38 points) is five points out of the Eastern Conference playoffs with three games left. The Crew, who lost 2-1 Saturday to the New York Red Bulls, must also pass four teams to have an opportunity to defend their 2020 MLS Cup championship.

"Our mindset is there's no frickin' way we're getting eliminated on our home field," Crew coach Caleb Porter said.

Orlando (12-8-11, 47 points) squandered an opportunity to move into a second-place tie in the East when the Lions blew a late two-goal lead against frontrunner New England and settled for a 2-2 tie on Sunday.

The Lions are fourth, two points behind Philadelphia and Nashville.

Orlando coach Oscar Pareja is glad the Lions have an opportunity to return the field quickly and not have a week to dwell on the points lost.

"We have to go one game at a time and address this past game, put our shoes back on and try to refresh ourselves," he said. "We must try to rejoin, try to understand what just happened and how we can get better and prepare for the Columbus game while trying to recover our energy, too, because we have to prepare ourselves.

"All of those things have to be done and that's the difficulty of our job, but we'll do it. We're professionals, we're ready to prepare for the game against Columbus and go fight for those points."

Orlando, 2-0-3 in the past five games, has won five straight against the Crew for its longest active winning streak against any opponent. The Lions won 3-2 at home on Sept. 4 in the most recent meeting.