Another 'dogfight'? No. 5 Ohio State hosts No. 20 Penn State 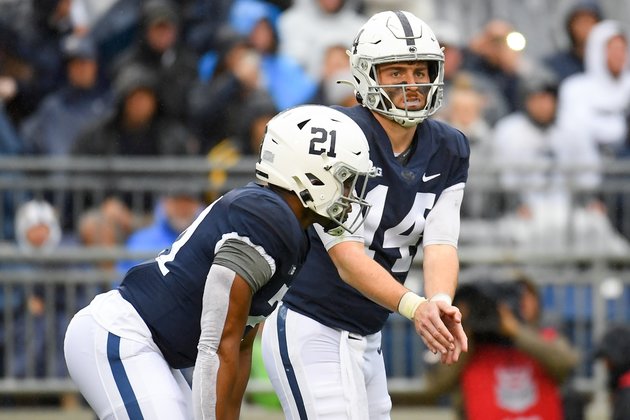 Penn State's upset loss to Illinois last Saturday -- in nine overtimes, no less -- might have taken away some of the luster, but the intensity will still be there in Columbus on Saturday night when the No. 20 Nittany Lions visit No. 5 Ohio State.

By losing 20-18 to Illinois, the Nittany Lions (5-2, 2-2 Big Ten) fell 13 spots in the AP rankings, but Ohio State coach Ryan Day said that doesn't matter when these two teams collide, noting that three of the past five games in the series have been decided by three points or fewer.

"If you look at the games we've had in the past with them, it's always been a dogfight," he said.

The Buckeyes (6-1, 4-0) know that Penn State needs a victory to salvage what has been a disappointing month, beginning with 23-20 defeat at then-No.3 Iowa on Oct. 9, when the Nittany Lions let a 17-3 lead slip away after quarterback Sean Clifford suffered an undisclosed injury.

"You can't take anything for granted," Day said. "You've seen it this year in college football -- anything can happen on any given Saturday."

Clifford returned against Illinois last Saturday but looked uncomfortable. He was 19 for 34 for 165 yards and a TD while being sacked four times.

"I think we are going to bounce back; it's not a question in my mind," Clifford said. "It's just getting some guys back healthy. I'm trying to get as healthy as I can be because we've got a good one (vs. Ohio State)."

"We expect to have a 100 percent Sean Clifford this weekend," the coach said.

Under the new NCAA overtime rules, games still tied after the second round begin with a two-point conversion try from the 3-yard line. Penn State failed to score in its first five attempts, made it in the eighth OT to match the Illini, but failed again in the ninth as Illinois scored.

A major reason for Penn State's short-yardage problems is a subpar running game, which is 100th of 130 schools with 118.9 yards per game.

"We've got to be more physical up front," Franklin said. "I think that's really important."

Penn State will rely on its defense to stop the Buckeyes' offensive juggernaut, which has surpassed 50 points in each of the past four games and has amassed more than 500 yards in six straight games.

"They are explosive as any offense in the country right now," Franklin said.

The Nittany Lions have the 15th-best pass defense -- tied with Liberty at 178 yards a game -- but will be tested by redshirt freshman quarterback C.J. Stroud, who has helped the Buckeyes to an average of 352.1 yards a game to rank seventh in that category.

In the three games since he sat against Akron to rest a sore shoulder, Stroud has completed 62 of 84 passes (73.8 percent) for 1,002 yards, 14 touchdowns and no interceptions. For the season he has 22 TDs against three interceptions.

"Whenever he throws the ball, he's very decisive with it," Ohio State tight end Jeremy Ruckert said. "It's a sign of a confident quarterback and a confident offense."