Bragging rights take back seat in Battle of Michigan 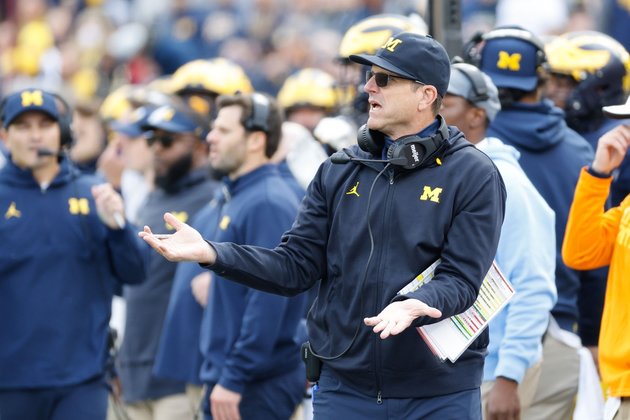 A matchup between Michigan and Michigan State always has special meaning within the state.

This year, the rivalry game is far bigger than simple bragging rights. There are major implications in the Big Ten and College Football Playoff races.

The last time both teams were ranked in the Top 10for their annual showdown, Roy Orbison's "Oh, Pretty Woman" was at the top of the record charts. That was October 1964. Michigan coach Jim Harbaugh was just an infant.

This year's game promises to be anything but pretty. It will be a hard-hitting affair between two teams that rely on a throwback style and old-school power-running game.

"You're talking all the way to - win the conference, win the national championship? It's one of those elimination mindsets," Harbaugh said. "Playoff mindset at this point. Win this game, it'll help your chances."

Thanks to a bye week, Michigan State had an extra week to prepare for its arch-rival.

"We all understand the significance of the game," Spartans second-year coach Mel Tucker said. "That doesn't take away from the fact we need to prepare. It's what we do during the week leading up to the game that's going to greatly affect the outcome of the game."

Tucker collected his first victory as Michigan State's coach at Michigan's Big House last season. That game was played before a sparse crowd due to COVID-19 protocols. Spartan Stadium will be jam packed on Saturday.

"That's what we're excited for, the fans, the atmosphere," Spartans safety Xavier Henderson said. "The last time we played Michigan at home, it was probably the loudest I've heard Spartan Stadium."

Michigan returned to prominence with an old-school Big Ten approach. It's not quite "three yards and a cloud of dust," but the Wolverines have leaned heavily on running backs Blake Corum and Hassan Haskins.

Corum has gained 729 yards on 116 carries, while Haskins has rushed for 602 yards on 124 carries. They have combined for 20 rushing touchdowns.

"Obviously, defensively you try to stop the run," Tucker said. "You'd like to make opponents one-dimensional if you can and then affect the quarterback with rush and coverage. So in the run game, we have to set the edge and build a wall."

Despite the bye week, Michigan State's Kenneth Walker III ranks second nationally with 997 yards on 152 carries. He's scored nine touchdowns on the ground and another as a receiver.

"He's got great vision, really good balance," Harbaugh said. "He runs their zone schemes, their man schemes extremely well. He's fast. He looks to be about a mid-4.4 guy. But he's also big, too. The most impressive thing with him is the yards he gets after contact."

The Spartans' quarterback, Payton Thorne, is averaging 243 passing yards per game and has thrown for 15 touchdowns, compared to four interceptions.

He'll be facing a Michigan defense that has held all but one of its opponents to 17 or fewer points.

"It's definitely a physical, gritty game," Michigan linebacker Josh Ross said. "It's definitely important for us as guys in-state, me and (defensive lineman) Aidan (Hutchinson), specifically, guys that are captains, guys that are leaders, guys that are in-state, to emphasize the importance of this rivalry. But at the end of the day, it's about doing our job, executing, and preparing the right way so we can have a great game this weekend."